While traditional Swiss cuisine is not very vegan-friendly, there are dozens more cuisines to choose from in this über-cosmopolitan city. Some of these cuisines are naturally plant-based, or at the very least include several dishes that are naturally vegan. Here’s just a sampling:

Cozy Italian restaurant with a lovely décor and a very vegan-friendly menu. There are four different vegan pizzas on offer, as well as some pasta dishes and a “pizza salad”, which is a salad that comes in an edible bowl made of pizza dough. Wait, what?! They also do gluten-free pizza.

The Pizza “Verde” at Pizza Leggera

Another great pizza place that offers an amazing pizza marinara. This place is always busy, but their pizza is just so good. There are also a few vegan pasta options on the menu. 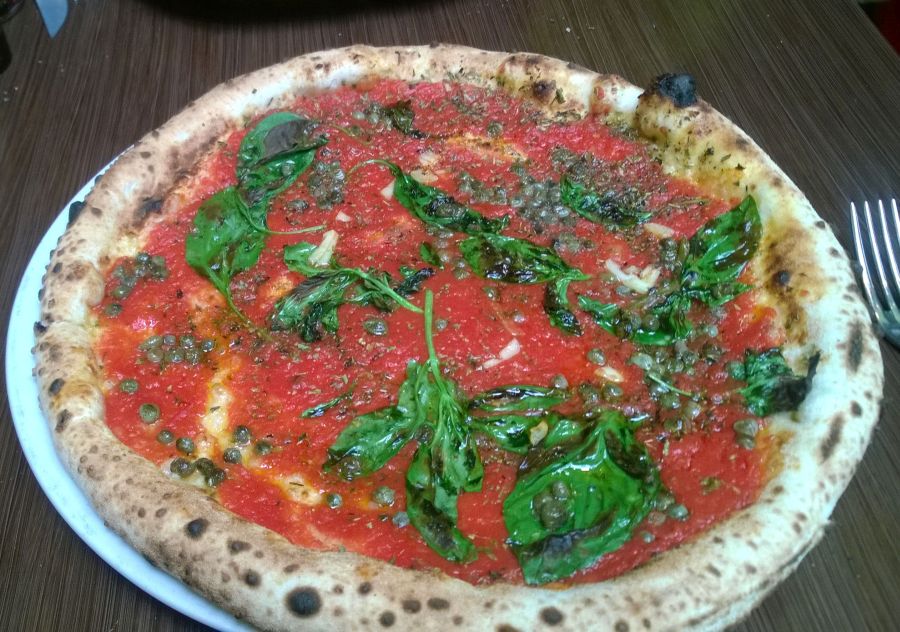 This Lebanese restaurant may not have the classiest atmosphere (it’s located just a block or so away from Geneva’s red light district), but it does have some of the best Middle Eastern food in the city, and at quite reasonable prices.

There are a number of vegan dishes that can be ordered à la carte, but the best deal is probably the vegetarian plate (assiette végétarienne). Just ask to substitute the labneh (strained yoghurt) with extra hummus. 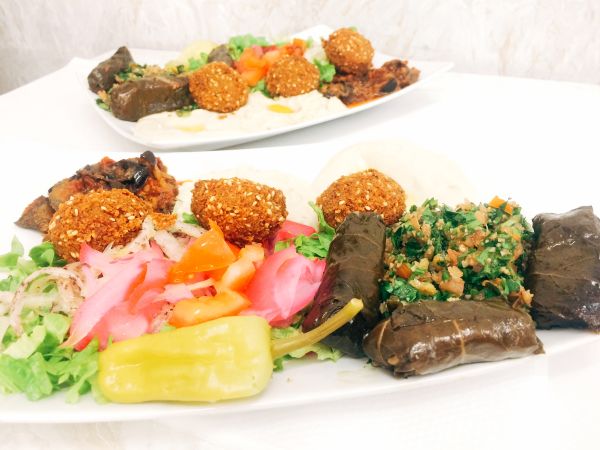 The vegetarian plate at Al Amir is a winner!

There’s loads of Lebanese food around in Geneva, so here’s a short list of other options:

For take-out, Saj Eat serves man’ouche (flatbread) with two vegan options. More “hip” places include Street Beirout and Homous & Co (though all their food is prepackaged, which is not very sustainable).

And for a more traditional upscale restaurant-experience, try La Caravan Passe or Cedres du Liban, which both have vegan mezze plates.

Due to the large number of refugees and asylum-seekers from Eritrea, Geneva has a plethora of Eritrean restaurants to choose from. In my opinion, this family-run place is the best, hands down.

Every Tuesday, Wednesday, Friday and Saturday, Elsa and her crew offer an all-you-can-eat buffet for just CHF 21, and more than half the dishes in the buffet are vegan. 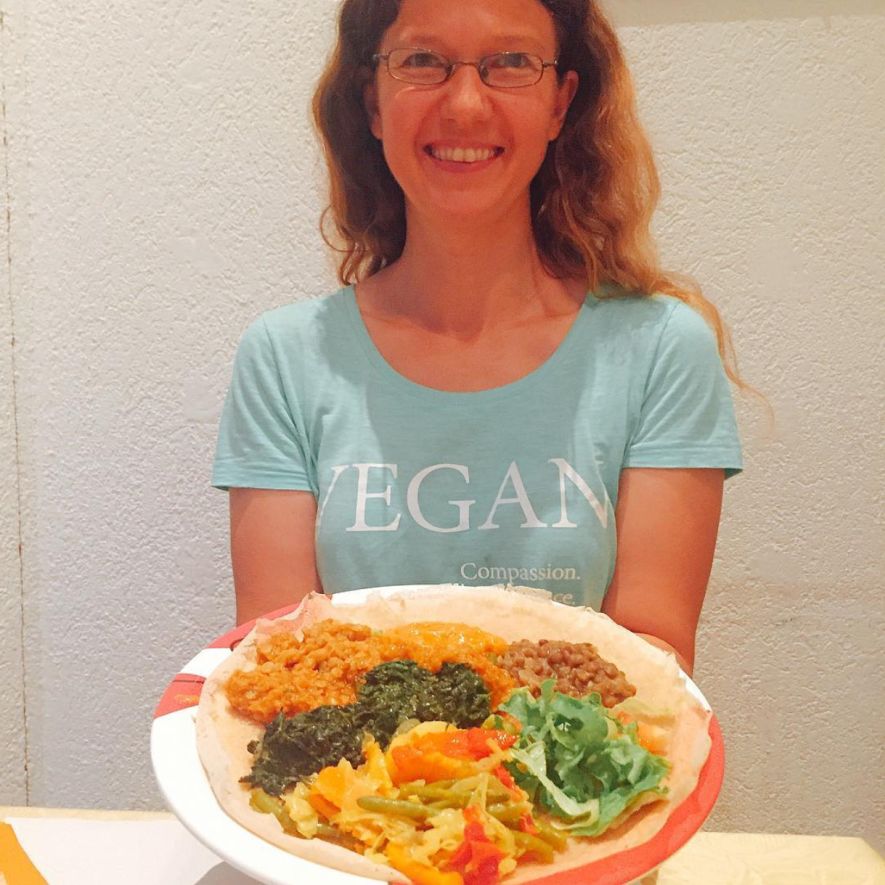 Messy but delicious! There’s no cutlery at Red Sea. Just grab some injera!

When I lived in Geneva, this was my favorite spot for vegan Indian food. The staff were very accommodating and happy to adapt many of their vegetarian dishes to make them vegan.

But it seems they’ve now changed the concept of the restaurant to focus on thalis. And Sandra from Going Out Vegan didn’t have a very positive experience there. So try it for yourself, but be aware it might have changed for the worse.

Another great Indian restaurant is Sajna. Their service is great, and they have several vegan dishes on the menu.

Additionally, they are super flexible with making dishes vegan on request by subbing cream for coconut milk. Instead of the (not vegan) naan, try the chapati. Also, they make vegan desserts if you request it when reserving. 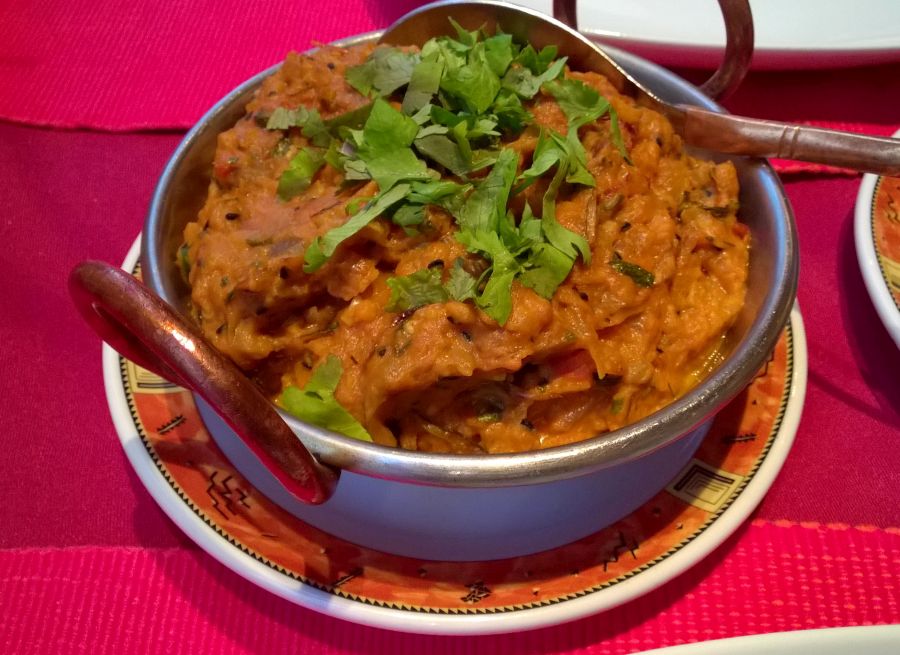 There are several vegan curries on the menu at Sajna.

A fast-casual place with a few locations in Geneva. They serve East Asian fusion, including  delicious spring rolls, rice and noodle dishes. You choose the ingredients, so it’s very customizable. They also have bubble tea and mochi. 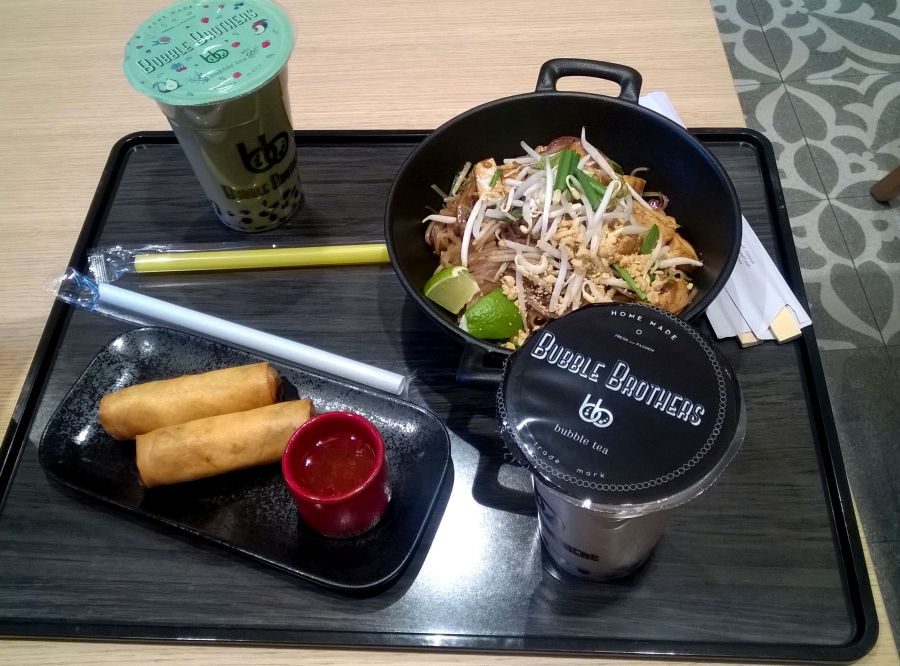 Taco Rico is a Mexican food place that has vegan options marked on the menu. They serve TexMex food like tacos and nachos.

Since you can pick yourself what you want in your taco or burrito, you can customize your order any way you want.

Bonus: the vegan options are cheaper, and you don’t have to pay extra to add guacamole! 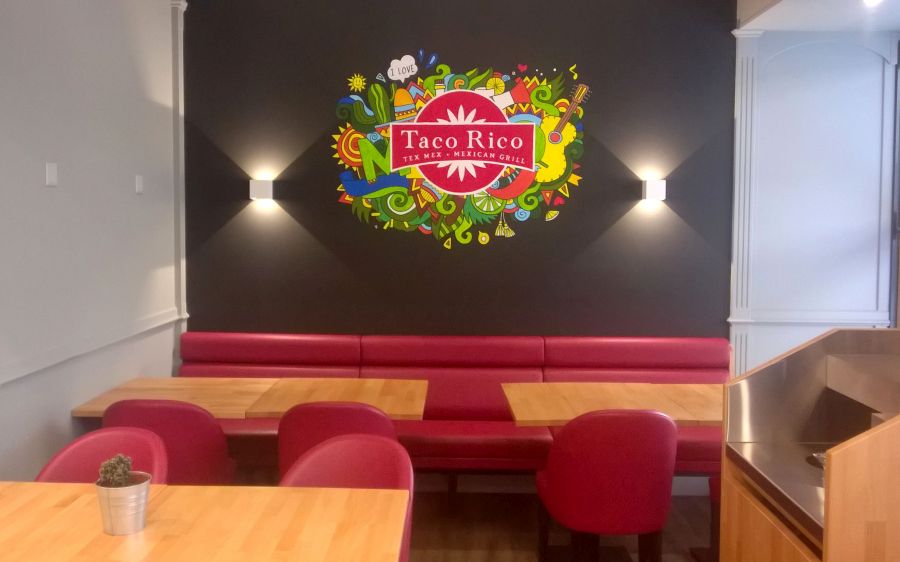 Taco Rico is the place to go for TexMex in Geneva

Quick Bites and Take Away in Geneva

This local coffee shop first opened in 2010 and now has four locations in Geneva. They offer soy milk for their coffee drinks, and they also serve a vegan lemon cake. Some locations carry more substantial dishes, and at those outlets you may find a quinoa salad or other savory vegan option.

Relax with coffee and cake at Boréal Coffee Shop

This Swiss chain has locations throughout the country and can often be found in Swiss train stations. They bake fresh brezels, which are big, doughy pretzels like the ones sold in American shopping malls.

While some are filled with non-vegan ingredients, all the unfilled ones are vegan, including the ones covered in pumpkin seeds, sunflower seeds, poppy seeds, etc.

These are even labeled as vegan in the display case. Be careful though, as sometimes the labels may be placed incorrectly. 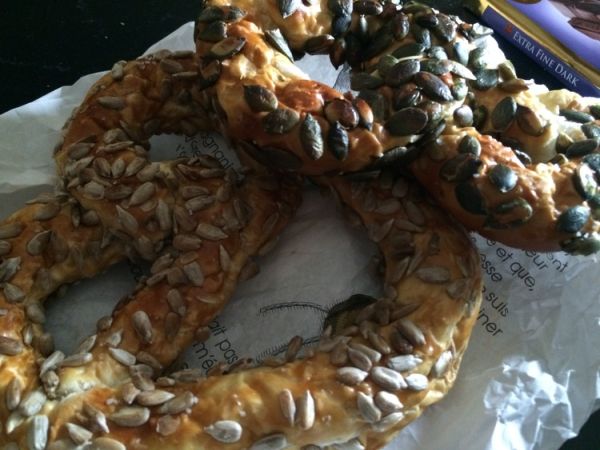 The pretzels at Brezelkönig are scrumptious!

Gelatomania makes authentic Italian gelato from scratch. As is the case with most Italian gelato, the fruit flavours here are all vegan. As an added bonus, so is the dark chocolate!

On hot summer days, the queue often snakes out the door, especially at their very popular Pâquis location. There are benches in the square across the street where you can sit and enjoy your ice cream. Alternatively, Lake Geneva is just a short walk away. 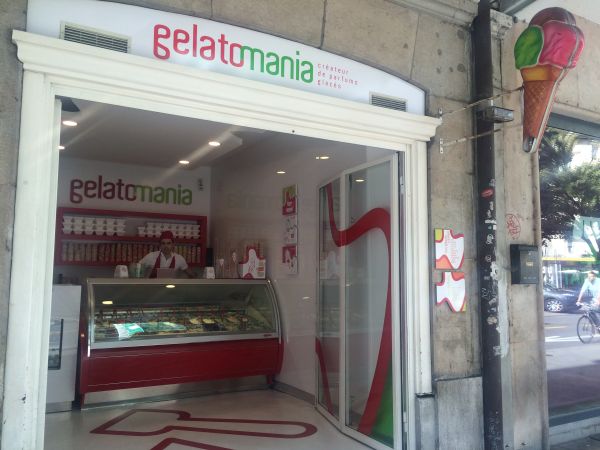 Gelato is the perfect treat on a hot summer’s day

Gelatomania used to be the undisputed king of ice cream in Geneva, until Manu came along. The company grew quickly and now boasts four different locations in the city. One of these is just down the street from Gelatomania in Pâquis and often has shorter queues.

A few years ago, they won the Tigel Ice Cup and were crowned as the makers of the best homemade ice cream in Switzerland. While they’re fruit flavors are vegan, their dark chocolate flavor unfortunately contains egg yolks. 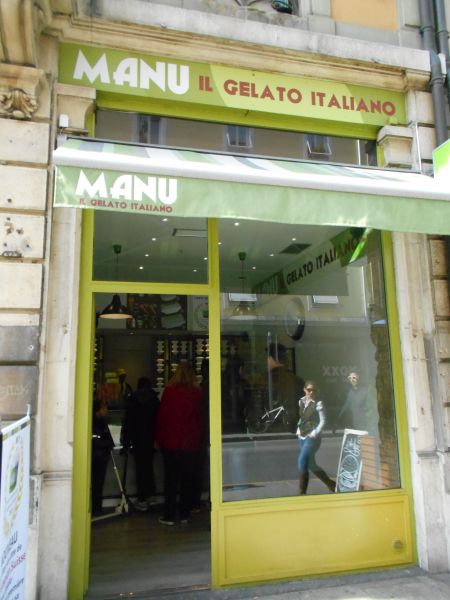 Manu has been giving Gelatomania a run for its money

This new coffee place opened recently and is located in a cool industrial space in Eaux-Vives. They serve coffee with a variety of plant milks and have a few vegan pastries and vegan quiche. 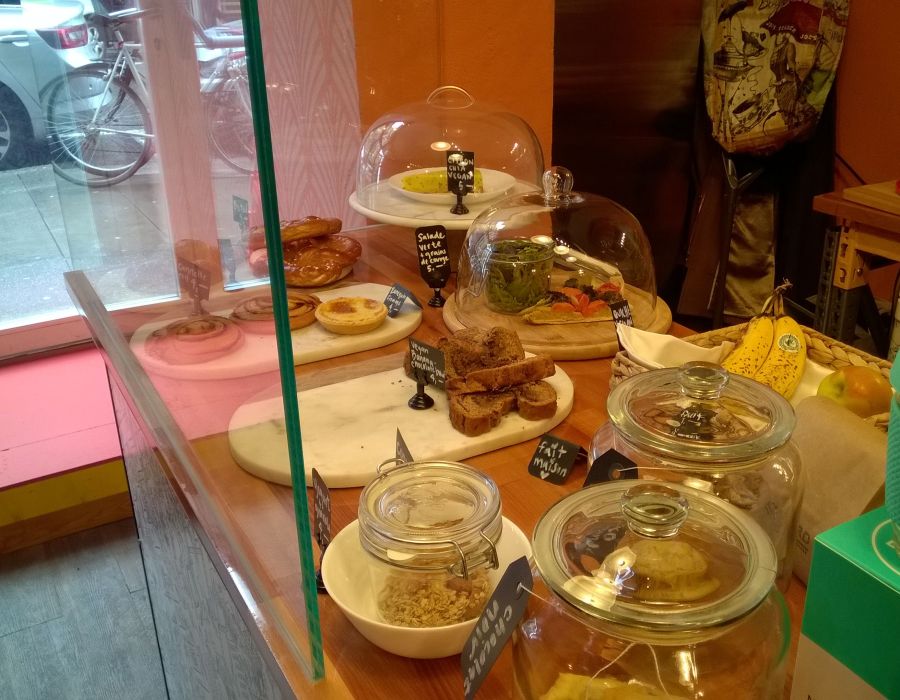 Pastries at Corde Coffee, some of which are vegan.

A small take-out place in the centre that sells hot dogs, including a vegan version!

Sells focaccia and pizza al taglio. The latter is pizza by the slice and is a common street food in Italy. They also have a special vegan focaccia, and the marinara pizza is vegan. 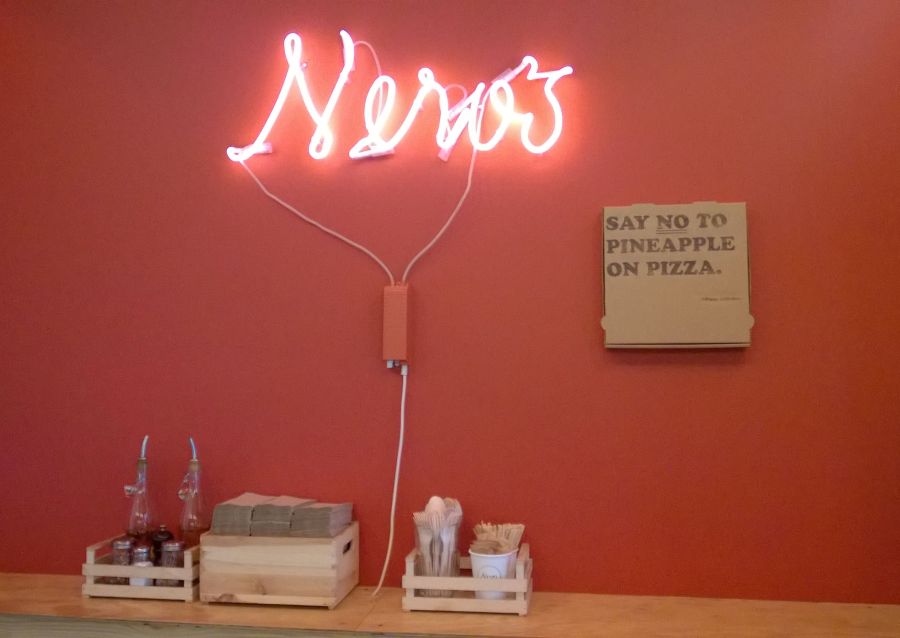 Nero’s is a typical pizza al taglio joint, as you would find on the streets of Italy.

This small shop sells juices, focaccia, salads and sandwiches. The vegan focaccia with hummus and grilled veggies is great!

All food sold here is spherical. Vegan options include vegan balls with quinoa and rostiballs. This is a round version of rosti, one of just a few traditional Swiss dishes that are vegan. 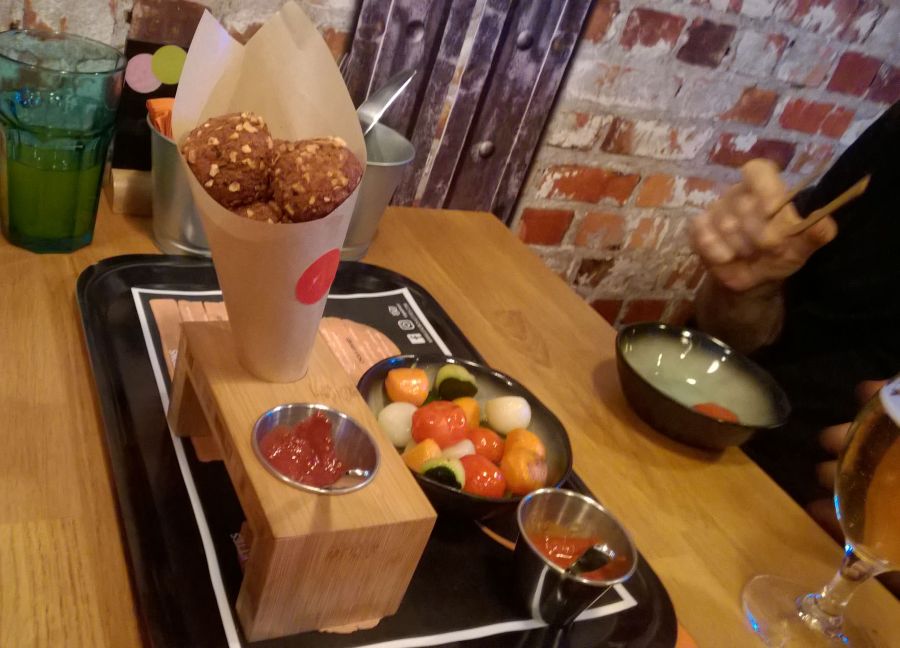 Notice how every food item in this photo is round?

Whether you want to grab a quick bite on the go or cook up a full meal for yourself, you can find plenty of vegan ingredients and ready-made meals in Geneva’s mainstream grocery stores. For specialty items like tempeh, seitan, vegan cheeses, etc., health food stores are your best bet.

The number of vegan products sold at Coop supermarkets has exploded just in the past year or two, and new ones continue to be added. Coop has their own vegetarian line of products, called Karma, that includes microwavable dinners, seasoned tofu, kale chips, and takeaway sandwiches and wraps, among other things.

In addition, Coop has recently added to their shelves a number of vegan products made by the Veganz supermarket chain. They now offer vegan cookies, ice cream, white chocolate and more! 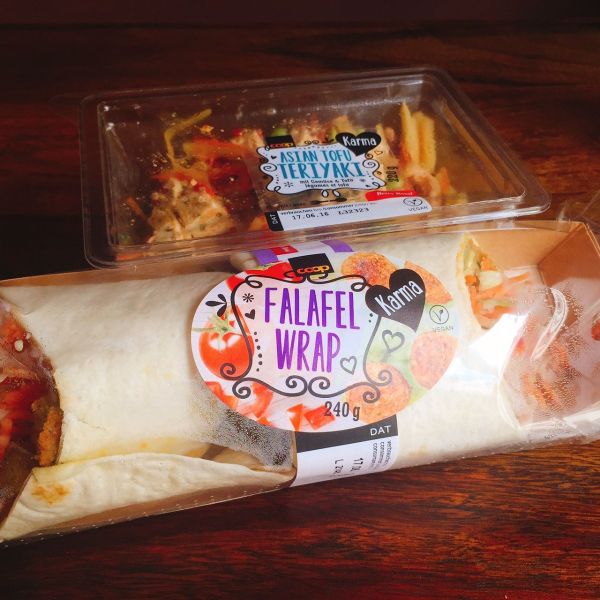 Migros is the other main supermarket chain in Switzerland, and together with Coop they form a duopoly. While they do not yet offer as many vegan products as Coop, they do carry some vegan ready-made meals, such as frozen spring rolls or Chinese dim sum, in addition to plenty of accidentally vegan products. They also stock the Coco Ice Land coconut milk ice cream.

Migro has fewer meat and dairy replacements compared with Coop, but they do have some good products. Tip: check the Migros-To-Go section of the store for the ‘vegan coquerli’, a.k.a. vegan sausage bread! It’s clearly marked as vegan.

They also have some small blueberry and apricot pies that are vegan and labelled as such.

Their online store, called LeShop.ch, has a search function that allows you to see all Migros’ vegan products at a glance. These include a wide range of Alnatura products (an organic and fair trade brand with many vegan items) that are not found in their brick and mortar stores. 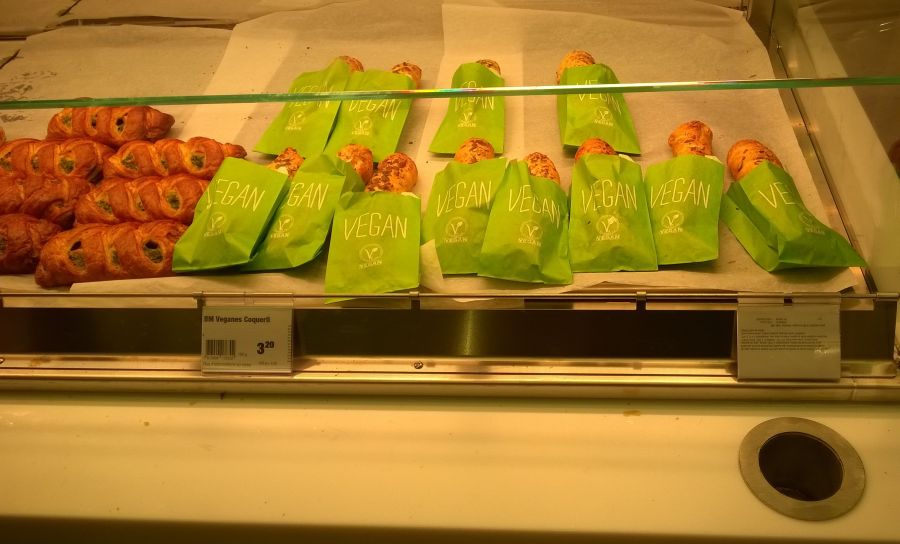 Alna is a local institution; it’s the oldest health food store in Geneva and has been around for more than 80 years! The staff is helpful and eager to stock more vegan products.

If you’re looking for something and don’t see it, ask. They just might order it for you! Carries tempeh, setain, vegan meats and cheeses, nut butters, etc. They also sell some ready-made foods like sandwiches and energy balls, some of which are vegan. 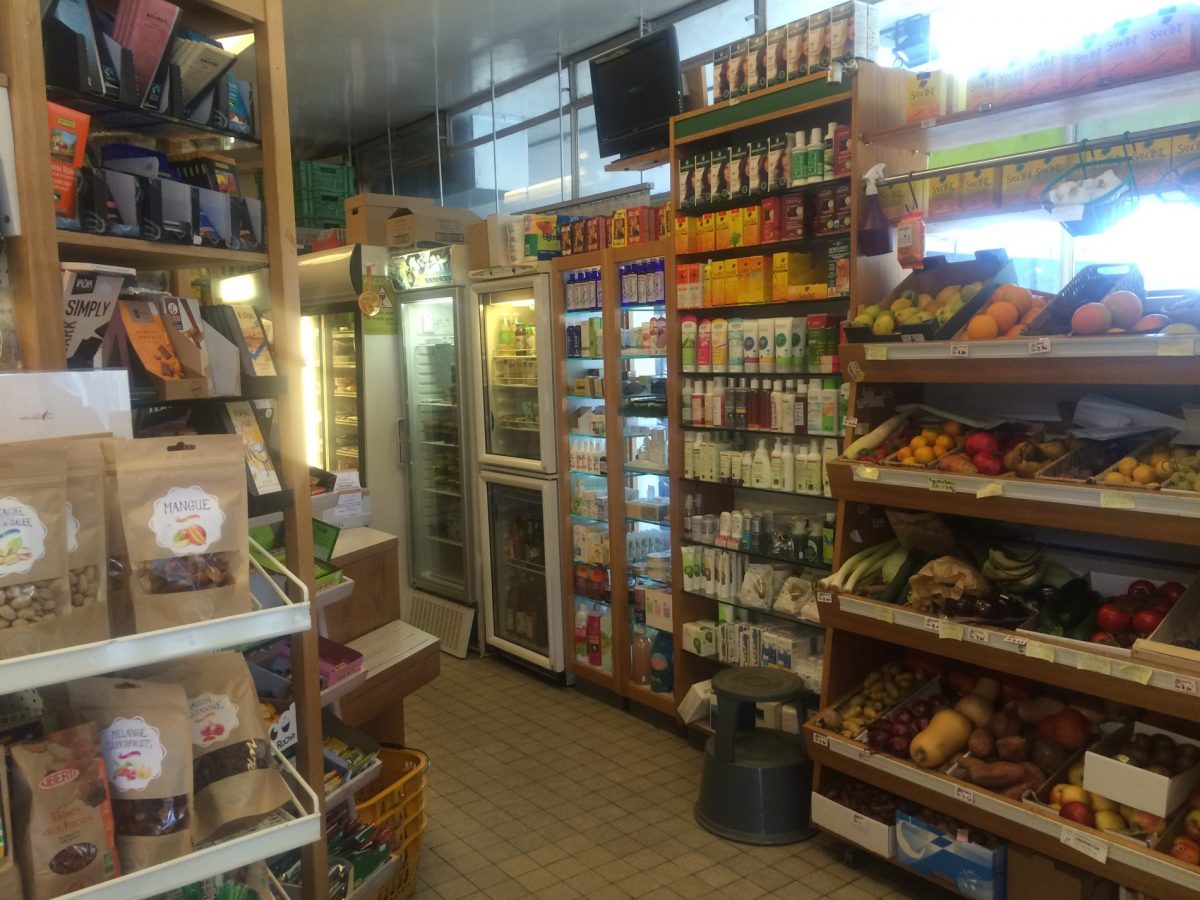 Chain of organic shops. Has lots of vegan foods that are hard to find in other places, like Soyanada sour cream and seitan. Also sells personal care products.

This health food store in Eaux-Vives is a bit larger than Alna and so is able to stock a wider variety of products. In addition to food, they also carry home cleaning and personal hygiene products with the vegan label. In the chilled section, look out for the delicious homemade cashew cheeses from the Crèmerie Végane! 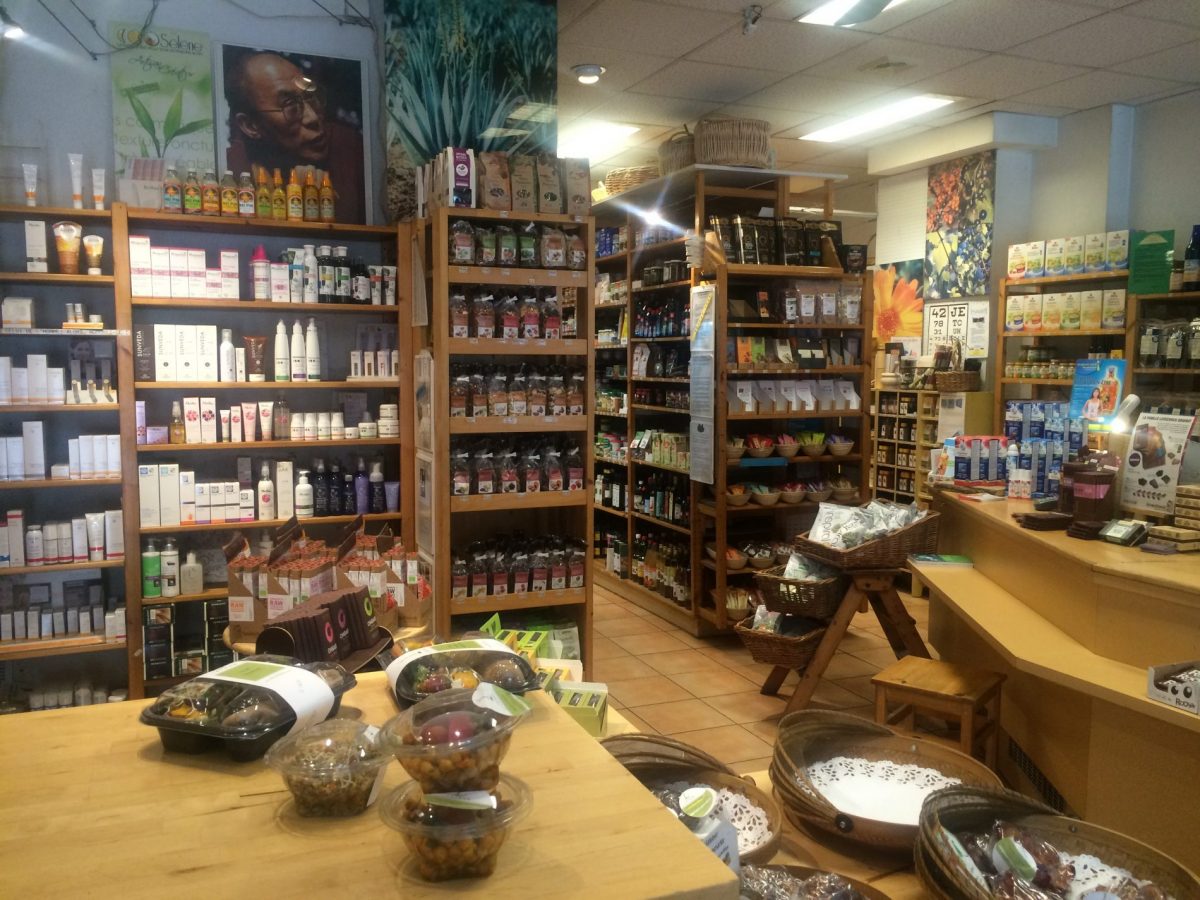 From cookies to cream cheese to cleaning products, Marché de Vie has just about everything

This relatively new arrival in Geneva follows an innovative concept: a packaging-free grocery store. They sell everything in bulk, from nuts to spices to olive oil to shampoo. Bring your own reusable containers, or you can purchase some here if you don’t have any. A great eco-friendly concept and a beautifully-decorated store. 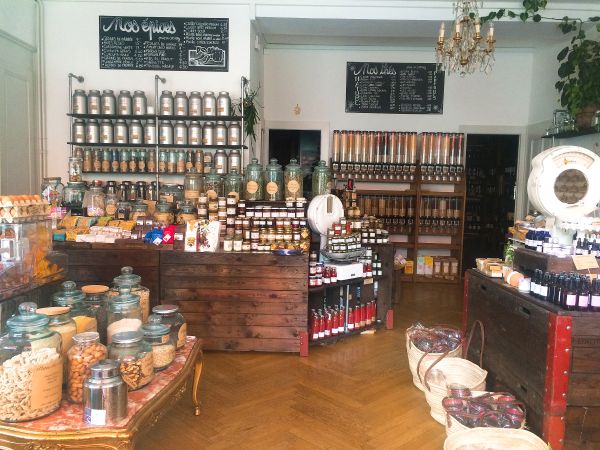 You can buy just about anything in bulk here. Just bring your own containers!

Another packaging-free store. In addition to the usual suspects (flour, oil, soaps, etc.), they also sell some vegan sweets.

Super small organic shop that also serves breakfast and lunch, including vegan options. There are only a few tables, so it’s mostly for take away.

This one-woman company makes vegan pastries (cookies, pies) which are sold in places around town like Bocal Local and Corde Coffee. In addition, she also offers homemade seitan and tempeh. You can also order from her directly on her website. She delivers by bike!

Hidden inside this gift shop near Plainpalais is a fully vegan ice cream parlor! They serve lots of different flavors and also have vegan cones. 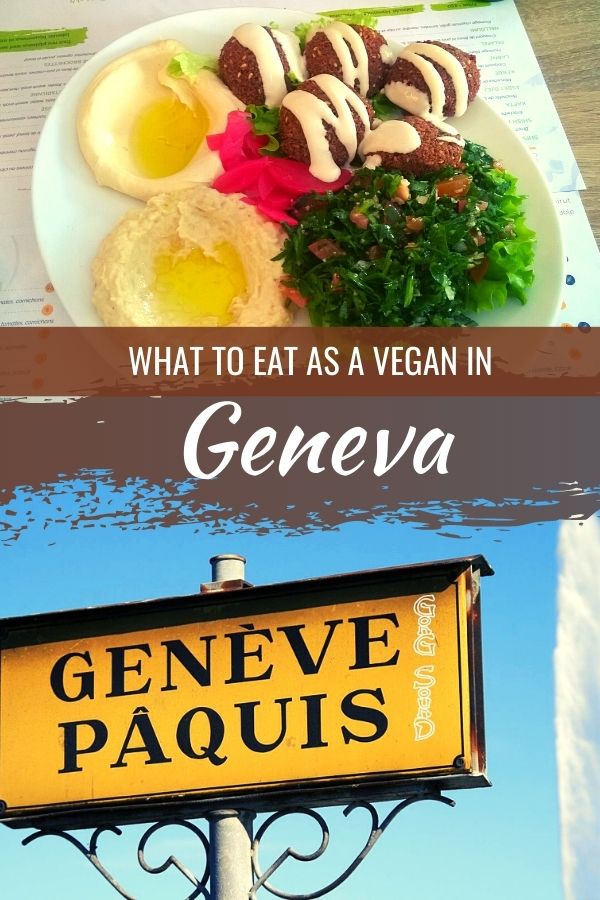 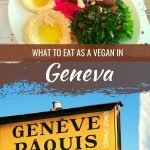 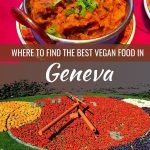 Intrepid traveler, vegan foodie and animal lover. I uncover vegan treasures all around the world, so you can be vegan anywhere and spread compassion everywhere.

You are viewing cached results from https://www.thenomadicvegan.com/vegan-food-in-geneva-switzerland/