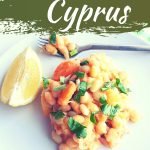 Cyprus is an island with a rich history that’s situated in the eastern Mediterranean. Full of culture and tradition, Cyprus has much more to offer than just a pretty beach. It’s also an ideal travel destination for any time of the year, owing to its long summers and mild winters.

The Cyprus vegan scene has really blossomed, and today being vegan in Cyprus is easier than ever. Many vegan and vegan-friendly businesses, including hotels, restaurants, coffee shops and supermarkets, cater to both visitors and locals who want to eat vegan.

With almost 200 designated traditional fasting days per year, Cyprus restaurants often have several “nistisimo” options. “Nistisimo” is the Greek word for fasting, and it’s a really useful word to know when visiting Cyprus.

In this case, fasting doesn’t mean not eating at all. It simply means not eating certain things. “Nistisimo” food is free of most, if not all, animal products. You should make it clear when ordering that you don’t eat fish or honey, though, because some fasting periods include them.

Lent, which is the period before Easter, is the most important fasting period. During this time, restaurants have special fasting menus, and bakeries have dairy-free and egg-free pastries. For more information about the fasting traditions in the Orthodox church, see this article.

In the beautiful villages throughout the island, with their stone-built roads leading to the traditional taverns, you can often find vegan dishes on the menu. These will often be small dishes eaten as appetizers or side dishes. But it’s no problem to order a selection of these dishes to make a meze-style meal.

Or, if you make an advance request by email or through their social media, the tavern owners are usually happy to veganize some of their main dishes for you.

Stuffed vegetables – tomatoes, peppers or zucchinis – are called ‘GEMISTA’. Ask for the vegan version that is made with rice, herbs, tomato sauce and various diced vegetables.

‘FASOLADA’ is a traditional dish of boiled white beans with carrots, potatoes and celery that is served with olive oil and lemon juice or cooked in a rich tomato sauce.

‘LOUVI’ is just boiled black-eyed peas, which are strained and served with olive oil and lemon juice. It’s a must try, especially from May to July, when the peas are fresh and in season.

A traditional street food, ‘KOUPA’ can be found in many Mediterranean cuisines, including Cypriot cuisine. In Cyprus, the vegan version is made with crunchy bulgur filo pastry that’s stuffed with mushrooms, onions and parsley.

‘ANTHI’, which means “flowers”, has a filling that’s similar to the one used in ‘GEMISTA’. But instead of veggies, this filling is stuffed into big zucchini flowers.

A variety of different types of meatless balls can be found in Cyprus. Almost every traditional Cypriot tavern has its own version of ‘KOLOKITHOKEFTEDES’. These are deep fried balls or patties made from shredded zucchini, potatoes, herbs and spices.

In addition to the dishes listed here, many of the vegan dishes popular in Greece are also common on Cyprus.

Cyprus proudly hosts its own vegan festival, which takes place every September in a small village in the Larnaca district.

Organized by Vegan Fam, “Vegan Fam Festival” hosts a wide choice of vegan eateries serving an array of vegan street food. There’s also a vegan bazaar selling a variety of wonderful crafts and products, a dedicated wellbeing area including yoga, tai chi and meditation classes, cooking workshops, a kids’ corner and a seminar space with an interesting day-long line up of talks by professionals in their field.

In all towns, you can find street markets packed with fresh produce and as well as supermarkets with local produce. One of the largest supermarkets in Cyprus is “Papantoniou Hypermarkets” which stocks a great variety of vegan products.

All cities and towns in Cyprus offer a wide choice of organic shops that provide a wide variety of organic vegan products. Especially in Limassol, there is a 100% vegan shop called “Vegan For Life,” where you can find whatever your heart desires.

They stock everything from vegan cheese to Beyond Burger patties to frozen vegan pizzas. And if their storefront location in Limassol isn’t convenient for you, they’ll also deliver to other cities on the island. Contact them via their website or at this email address: [email protected].

Many people in Cyprus are into vegetable farming, either professionally or as a hobby, and some are into organic farming. “To Pervoli”, for example, produces award-winning organic olive oil and herbs grown under the nourishing Cyprus sun and in its nutritionally rich soil.

There is a long list of vegan-friendly places to stay, dine and shop on the island.

Five-star hotel “St Raphael Resort and Marina” in Limassol has an exclusively vegan restaurant called “Seashells Healthy Living”. Their philosophy is to offer a family-friendly atmosphere with delicious and healthy food for all.

Also located in Limassol, the “Four Seasons” hotel provides a vegan menu in all of their restaurants.

And for something a bit cozier, check out the Farriers vegan bed and breakfast. It’s located in a small village called Kouklia, not far from the Paphos airport. Vegan breakfast is included with the room price, and other meals are available on request. The owners also run a cattery and a home for rescue cats on the site, so it’s the perfect place for cat lovers.

In the capital, Nicosia, you can visit a 100% vegan restaurant called “Elysian”, where you’ll find both healthy and fast food dishes from all over the world. Personally, I recommend their delicious and juicy ‘Signature Burger’.

Another lovely place in Nicosia that’s worth visiting is “Katakwa Culture Art Café”. They source their award-winning coffee directly from small farms around the world. In addition to coffee, they also serve fresh juices, smoothies and vegan cakes by the ‘Green Mandala Team’. And they host a gallery and art exhibition space.

A must-try is their delicious ‘Raw Chocolate Coconut Cake’ with pumpkin seeds and rose petals.

Two other vegetarian restaurants with many vegan options are also worth mentioning.

Located in the city center, “Evergreen Vegan & Vegetarian” restaurant has a great selection of vegan options. They provide many healthy homemade foods and beverages, and they often host live music nights.

“Inga’s Veggie heaven” is a vegan-friendly restaurant in the old city, with vegan, gluten-free and sugar-free options for dine-in or takeaway. And another must-visit restaurant is Beirut Lebanese Kitchen, which serves three styles of falafel and the amazing Royal Vegan Sandwich with cauliflower and eggplant.

As mentioned above, Limassol has a fully vegan restaurant called “Seashells” that’s attached to a five-star hotel. In addition, there’s also “The Green Berry” for vegan street food. And “Bakery Kafeneio” is a vegetarian-friendly coffee shop in the heart of Limassol with vegan and gluten-free dishes.

And Hummus Bar serves street food at its best, including amazing hummus combinations with wraps, patties and salads.

In Paphos, “Meraki Market Café” is a vegan café, catering for health-conscious eaters, vegetarians and vegans. Their menu changes every few months and always features seasonal fruits and vegetables.

Looking for authentic Indian street food? Though not strictly vegan, “Namaste” is worth mentioning for the variety of vegan dishes it offers. Just ask for their vegan menu. Upon request, the chefs can also veganize vegetarian dishes using plant-based cream or milk. I highly recommend their Masala Dosa.

And for when you’re craving pizza, Pizza Box in Kathikas serves some awesome vegan options!

For Asian cuisine, another great place with vegan menu options is “Wagamama”, with restaurants in Limassol, Nicosia and Paphos. They offer great vegan yasai sushi and yasai samla curry.

All over Cyprus you can find vineyards and wineries. The following vineyards produce vegan wines:

You may visit and taste their amazing products upon prior request.

Two outstanding brands based in Cyprus are enriching the vegan market on the island. “Kypwell” gets its name from ‘Kypros’, which is Cyprus in Greek. It’s a skincare company that emphasizes wellbeing. They only use organic Cypriot herbs and plants in their products, providing vegan skincare products and spa treatments.

PAT, or Plant A Tree, is a vegan company based in Cyprus that plants a tree for every bag or pair of shoes purchased, allowing customers to have a direct impact on their environment.

Whether just visiting or living in Cyprus, vegan choices can be found all around the island, and like in the rest of the world, they are growing and progressing day by day.

You are viewing cached results from https://www.thenomadicvegan.com/vegan-cyprus-guide/