Skip to Content
Home Travel Plitvice Lakes National Park Vs Krka National Park? How To Choose Between Krka Or Plitvice

Spring is the best time to see all of Croatia’s eight stunning national parks. This means it’s the time of the year that one of the most common questions I’m always asked lands in my inbox – over and over again.

Which of the national parks to visit? Readers are always asking me to help them choose between Plitvice Lakes National Park or Krka National Park.

The best answer to the Plitvice or Krka question is the following. If you have the time, you should visit them both, because they are equally as beautiful, in different ways.

If you don’t have time, however, and you do have to choose between Krka or Plitvice, then it all comes down to where you’ll be based, your interests, and how much time you actually have.

Plitvice Lakes National Park is bigger and has more to see, but it is further inland and takes longer to get to than Krka Lakes if you are staying in Dubrovnik or Split.

On the other hand, Krka National Park is much more accessible from Zadar and Split but is smaller. So, if you’re short on time, that helps loads.

See what I mean? Choosing between Krka or Plitvice Lakes is already getting confusing. There are just so many factors. It all depends on your situation.

Obviously, this will depend on traffic also, as, during the summer season, it seems like everyone is trying to get to this park! You’ll find lots of tours and buses that head here. You can also get to Plitvice Lakes from the coast, but because it is further away from the coast, you’ll pay more for these than you would from Zagreb. However, this shouldn’t put you off because it doesn’t have a UNESCO World Heritage status for nothing!

Plitvice Lakes has a series of 16 interconnected lakes, which spans a much larger area than Krka does, at around 8km when the lakes run together, and 300 square kilometers in area.

It takes around 20 minutes to reach the parking lot’s park entrance, but the size is a blessing because it does get so crowded. If you have a weekend spare, you should definitely dedicate it to exploring Plitvice because a day, including the travel time, probably wouldn’t leave you with enough to really explore.

Check out these great accommodation options near Plitvice Lakes for every budget. 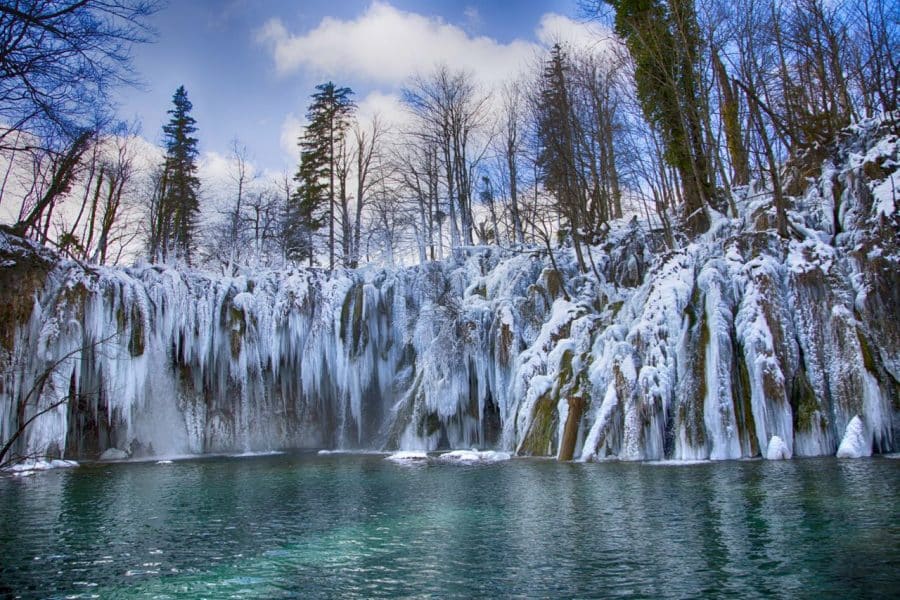 You can’t swim in the park; it’s prohibited. On the other hand, there are countless walking trails around the park, which take you around the lakes and the natural landscape.

If you want to take a million stunning photos, Plitvice is the best bet, as some of the sights you’ll see are truly amazing. If you’re into wildlife spotting, you’ll also be able to see wolves, bears, birds, and all manner of other species of flora and fauna if you stay longer – and head off the main walking trail being pounded by the busloads. 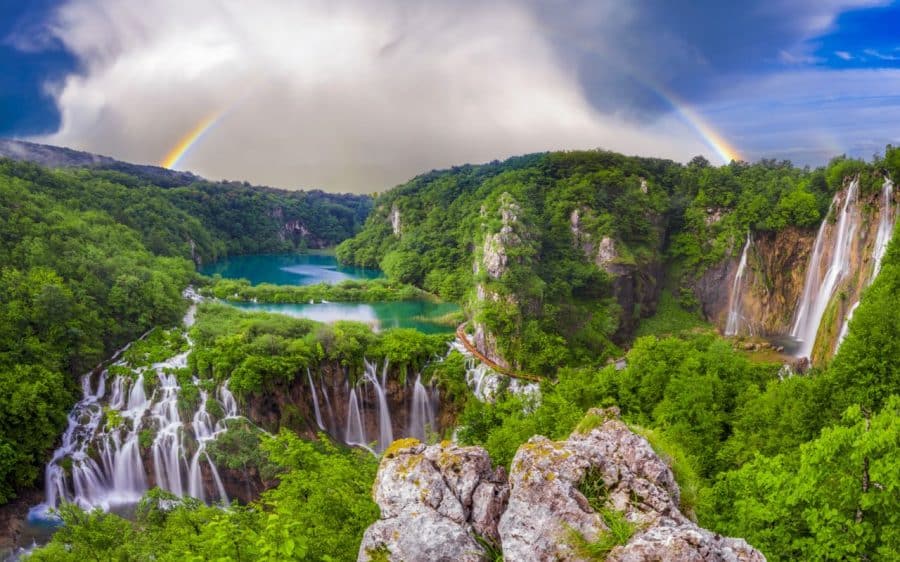 Entry into the park depends on the season and is subject to change – so please do a double check before making your way there. Check the park website for the latest fees.

Child tickets are free up to 7years of age, plus you can buy multiple day entry tickets, depending on how long you’re planning on staying for.

When comparing Krka vs. Plitvice Lakes only in terms of size, Krka National Park loses. This is definitely the smaller of the two parks is Krka, but that also comes with some advantages over its bigger neighbor. For starters, Krka might be smaller, at around 142 square kilometers, but it is closer to the main coastal resorts, at just an hour from Zadar by road, in Sibenik-Knin County. As the biggest major town near Krka, Sibenik now offers travelers plentiful options for accommodation.

Exact times depend upon traffic, especially during the summer season. You won’t struggle to find day trips being sold from excursion offices either.

Krka falls encompass the biggest section of the Krka River and is home to 12 stunning waterfalls, including the largest one, Skradinski Buk waterfall. The smaller size of the park also means it is ideal for families who want a day out in nature but who don’t want to travel too far and don’t want to exert themselves too much.

However, Krka National Park isn’t all about nature, as there are a few nods to history within its borders too. There is a working loom and blacksmith within the small village, and you can see how life used to be before the dawn of the Industrial Revolution.

So, while Plitvice might be ideal for a weekend away in nature, Krka is undoubtedly the best bet for those who just have a day spare.

We mentioned that you couldn’t swim in the lakes of Plitvice, and as of 2021, you can no longer swim at Krka either. You used to be able to swim in front of the biggest waterfall, Skradinski Buk, but now you’ll just have to hope to catch some spray as you pass to cool off.

The downside is that there is only one walking trail, compared to the many you’ll find at Plitvice. However, you won’t miss out on nature as this one trail has some beautiful scenery to pass through; plus, during the summer months, when the trees are really blooming, you’ll notice a pleasant scent in the air.

Entry costs depend upon the season, and there are discounted entry for children.

I will add more info on this as we write it, but for now, you can get to either national park as follows:

Don’t Take Just My Word For It

I asked the Plitvice vs Krka question on my Facebook page a few years ago – and you can see just what everyone had to say – and read the comments to see why.

So, Which Should You Visit? Plitvice Or Krka?

I urge you to try to find the time, go to both. Okay, I know most of you short on time, so here goes, if you’re mostly staying on the coast, head to Krka waterfalls. If you land in Zagreb, go to Plitvice on the way to the coast.

Both parks are truly stunning, and while Plitvice is much larger, and some say more beautiful, that is not the only factor.

So, tell us will it be Krka or Plitvice Lakes?

You are viewing cached results from https://www.chasingthedonkey.com/plitvice-lakes-national-park-vs-krka-or-plitvice/