Kyoto is synonymous with traditional Japan, has the highest cultural treasure in the entire country. If you want to see the ancient side of Japan and wish to explore the depths of its civilization, culture and to adapt to its customs and traditions, you should not miss this ancient city. But the Japanese, in general, do not spare any effort in helping the stranger in their language and surround him with their legendary politeness, which has become a paddle and a distinctive sign in their personality and behavior.

And if Tokyo, the capital of Japan with its concrete forests, many of its buildings bear the signatures of famous architecture, is the symbol of modernity and civil administration in its most perfect manifestations and highest performance, then Kyoto, which was the capital of the Japanese empire for 1,100 years, and is still the capital of the Japanese arts of living, is the cradle of traditions and the home of ancient rituals that come to you wherever you wander through its streets and move between its temples and gardens. 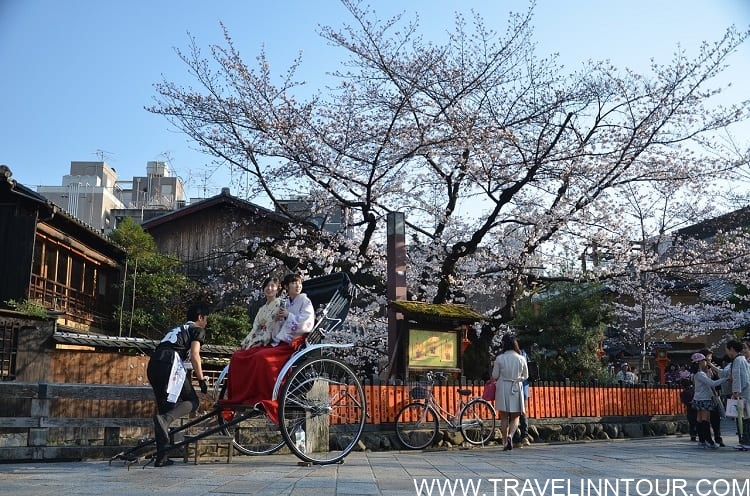 It takes an hour and a few minutes for the high-speed train journey to Kyoto from Osaka, which built its modern airport on landfilled in the sea, or nine hours from Tokyo for those who love to travel by trains that have reached the highest levels of comfort and sophistication in this country.

As soon as you leave the train station adjacent to the quiet “Kamo” (Kamogawa) river that crosses the city wandering through its beautiful traditional neighborhoods, the famous temples you have always seen in tourist advertisements and movies, or those in which historical and narrative events took place, such as the “Kinkaku-Ji” temple. The witch’s plots and adventures of the “golden wing” of the famous poet “Yukio Mishima”, who lived a life beyond the imagination of his novels, and spent in tragic circumstances, according to the rituals of “Siboku”.

The tea shops/salons, which number in the hundreds in Kyoto, are among the necessary visits to cross the atmosphere of this city that summarizes the spirit of Japan, which has long lived closed in on itself, isolated from what was going on around it in the Asian ocean, and in the world. Traditional architecture is made of wood, reeds, and silks and low tables with beautiful porcelain bowls and tea-making utensils rolled up by women in kimonos, which is not surprising for women to take to the streets in this city.

Tea rituals are also an essential part of the traditional Japanese hotel hospitality (Ryokan), which was intended for receiving travelers for short periods, and then today it has become a luxurious role for hosting foreign tourists. It is equipped with natural bathrooms and has private Japanese-style gardens and a kitchen that serves the most delicious old dishes and meals that these hotels are trying to revive. Staying in these hotels, even for one night, is an unforgettable experience, and an entrance to this community that is still inaccessible to foreigners.

In Kyoto, the visitor is not only satisfied with seeing the history and observing the ancient rituals and customs, but he lives them through his wandering of the temples that people of all ages, and all times, attend. They ask for luck in love, to be cured of illness, or to win a job.

More than ten thousand old traditional houses constitute one of the prides of Kyoto, and its municipality allocates a department to oversee its maintenance and care, especially since the total number in Japan does not exceed twenty thousand. Streets paved with polished stones, illuminated by lamps made of rice paper, take you into a world out of this world. Men and women go out in kimonos after sundown, attending clean popular cafes and restaurants, or chatting in parks until late, from early spring until early autumn, when the heat is moderate.

More than three-quarters of this city of 1.5 million residents are historically classified and has no less than 200 Japanese national treasures, some of which are on the UNESCO World Heritage List. Among the many museums that the city is proud of, such as the Museum of Contemporary Art, the National Museum, and the Manga Museum, we suggest a visit to the Museum of Traditional Crafts, which is classified as one of the most beautiful and important international museums in this area, if not the most beautiful. This museum is located close to the old imperial palace, surrounded by three temples, and includes spacious halls dedicated to artisan teachers who practice their arts daily in front of visitors and answer their questions with the help of translators dedicated to this purpose.

Places To Visit In Kyoto

If you are confused when choosing the temples you want to visit, due to their abundance, beauty, and historical importance, then you have only one option when you wants to stand on the pulse of daily life and shop in the popular markets in this ancient city: there is no alternative to a market the popular “Nishiki”, which dates back to the eighth century AD.

In that period, fishermen used the abundant groundwater surrounding the market to preserve the fish that they supplied to the imperial court, and then it became a fish market until the early second half of the nineteenth century. In 1927, when the central market of the city was opened, there were shops for vegetables, fruits, sweets, and others settled in the old market. Today thousands of residents and tourists visit them, and they are amazed at its cleanliness, arrangement, and colorful atmosphere.

From Nishiki Market, we suggest a visit to Arashiyama, with its narrow pedestrian-restricted streets, buildings, and traditional wooden shops, at the end of which are the entrance columns to the Sanjusangendo Temple, one of the most beautiful and largest Buddhist temples in Kyoto and Japan.

Perhaps the most beautiful conclusion of this tour of the ancient capital of the countries of the rising sun, the cradle of its ancient civilization and traditions, is a visit to the town of Nara, which is located on the outskirts of Kyoto, where there is the famous Todai-Ji Temple, which is considered a historical and religious reference in Japan and is listed on the UNESCO list, World Heritage Site. Its construction dates back to the eighth century AD, and it rises to a height of 750 meters, in the middle of a garden of 660 hectares, and inside it is a colossal statue of Buddha in bronze, surrounded by 150 of the most beautiful religious buildings in Asia.

Hope this Kyoto travel guide will help you plan a pleasant journey. 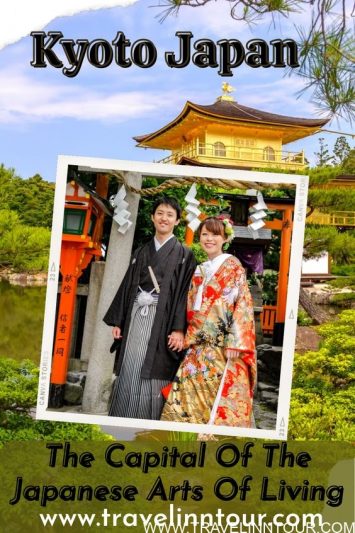 You are viewing cached results from https://www.travelinntour.com/asia/kyoto-travel-guide-vacation-destination-in-japan/