Zagreb is Croatia’s capital and has become increasingly popular as the entry point into Croatia, with more and more flights landing in this interesting city.  Zagreb has really come to life over the past 5 years with its world-famous Advent markets, unique Museums, and cool coffee culture, with many tourists spending a few days in Zagreb before making their way around Croatia.

This is because these are without a doubt two of the most popular cities in Croatia. The great news? Traveling from Zagreb to Zadar and Zadar to Zagreb is easy, with many options available to you.

How exactly do you get from Zagreb to Zadar, and how to get from Zadar to Zagreb? Let’s explore.

Just reverse the instructions to get from Zadar to Zagreb! We’re going to cover the primary modes of transport from Zagreb to Zadar.

How Far Is Zagreb From Zadar?

The distance from Zagreb to Zadar is 285 km and the drive taking the most direct route, along the A1 motorway, will take you 3 hours. The route will take you from Croatia’s capital through continental Croatia, Lika, to coastal Croatia through the Velebit Mountains.

Many people like to drive from Zadar to Zagreb, taking the old highway and stopping for a visit in Plitvice Lakes National Park, which is right along the route. This makes for super-efficient travel!  Of course, you can choose to drive, take the bus, train, plane, or take a private transfer from Zagreb to Zadar. Let’s check each option out, one by one. 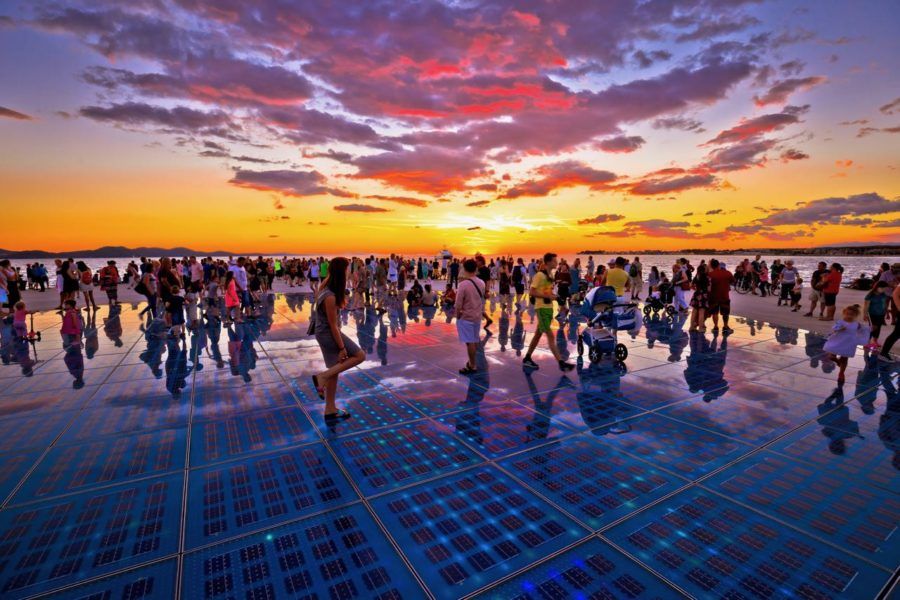 If you want to drive from Zagreb to Zadar or drive from Zadar to Zagreb and want to do it as quickly as possible, then the A1 motorway is your best bet. There are tolls on this motorway. A one-way trip will cost you 121 Kuna. All you need to do is leave Zagreb, enter the A1 motorway at Lucko and follow the signs all the way to Zadar.

As an alternative, you can choose to go along the old highway from Zagreb and Zadar. This obviously takes longer as the speed limits are much lower, but it’s also a pleasant drive. Plus, you can incorporate some stops along the way like Karlovac, the watermill village of Rastoke, and Plitvice.

There are many Zagreb car rental companies, and also a good variety in Zadar, so you can find the best deal possible. Almost all of them offer one-way travel options making your trip planning easy not having to return to your point of hire. In summary, driving from Zadar to Zagreb is very easy, the fastest way is down the motorway (paid route), or you can use the old road which has no toll and is slower.

By far, the cheapest option is to take the Zagreb Zadar bus. There are numerous Zadar to Zagreb bus services (40-50) that operate both through the day and even through the night. The earliest Zagreb bus departure is at 12:30 am and will have you in Zadar at 3:30 am.  A direct bus takes 3 hours,  depending on traffic.

If you are traveling in summer, we recommend that you book your ticket ahead of time, as this is a very popular and busy route. You can check out the timetable and buy tickets for Zagreb Main Bus Station and Zadar Main Bus Station from their respective websites.

As far as the buses go, they are comfortable, and some have Wi-Fi onboard, with a bathroom break along the way. Prices vary according to the bus company you use, but they are 100-200 kuna in general. Getting from Zagreb to Zadar by bus is definitely the cheapest way of traveling between Zadar and Zagreb.

If you want a comfortable, convenient, and totally hassle-free journey, then book a private transfer from Zagreb to Zadar or a Zadar to Zagreb transfer. A private transfer from Zadar to Zagreb will pick you up at your Zadar Hotel (door to door service), take care of your luggage, and you’ll be whisked off in a new vehicle equipped with free wifi and bottled water. Along the way, feel free to make a couple of photo stops before your driver drops you off at your Zagreb Hotel. No waiting for buses, other people and you can stop when and where you like.

Many travelers like to travel from Zagreb to Zadar via Plitvice Lakes National Park.   Plitvice is along the “old road” route, and it saves you having to backtrack to visit the National Parks once you are in Zadar. You save quite a bit of money by incorporating a Plitvice stop into this transfer.

In summary, Zagreb’s taxi to Split is the best way to get from Zagreb to Zadar when it comes to convenience and comfort.

Whilst it’s possible to catch a train from Zagreb to Zadar, it’s not recommended. The trains are in poor condition and take FOREVER! If you are keen on having a less than pleasant train journey from Zagreb to Zadar by train, you can check out the Croatian Railways website’s timetable and ticket prices. The bus and private transfer are much better options.

Flights between Zagreb and Zadar or flights from Zadar to Zagreb are your best option if you are short on time and need to get to Zadar or Zagreb quickly. Flights are direct and take around 40 minutes, which is significantly quicker than all the other options! There can be a downside, a poor flight connection. During winter there is one flight per day and in summer that increases to 2 flights per day.

Obviously, Zadar to Zagreb flight is more expensive than the other public transport options. The other factor when determining your costs is that Zagreb Airport is located around 30 mins from Zagreb, while Zadar Airport lies around 20 minutes from the center of Zadar. Lastly, by taking the flight, you miss the opportunity to stop in Plitvice Lakes and Rastoke.

Zagreb To Zadar Via Plitvice Lakes

The vast majority of travelers are now opting to drive from Zagreb to Zadar and stop at Plitvice Lakes National Park simply because it’s both a time and cost-efficient way of visiting Plitvice Lakes.

Plitvice Lakes is Croatia’s most famous National Park and an absolute must-see site. This UNESCO listed National Park and its 16 interconnected lakes and falls are impressive. You can also make a short stop at the charming watermill village of Rastoke, which also along the route.

If you need to travel from Zagreb to Zadar via Plitvice Lakes, your best options are: 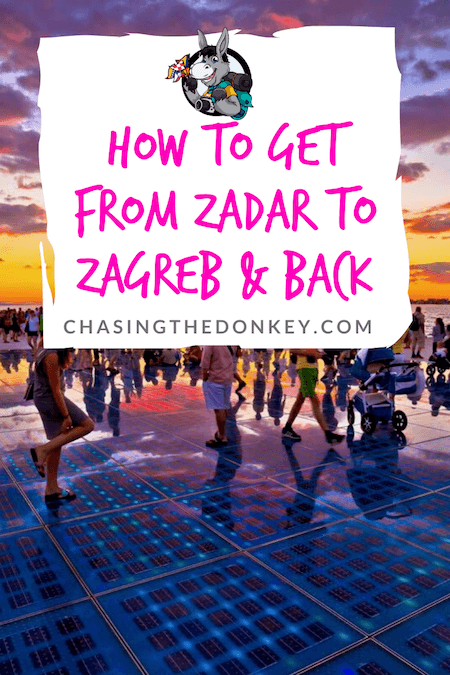 What Sites Are There Between Zagreb And Zadar?

There are quite a number of interesting places you can make a stop and visit when traveling from Zagreb to Zadar, especially if you have a bit of time up your sleeve. Here are some ideas:

You are viewing cached results from https://www.chasingthedonkey.com/how-to-get-from-zagreb-to-zadar-zadar-to-zagreb/