these two books guiding me to its capital city – Madison – with The Wrong Sister, and within its beautiful countryside with The Story of Edgar Sawtelle. And although I am still on quarantine and isolating, I can still discover the many things to do in Wisconsin this weekend simply from my comfortable armchair or back porch rocker.

The Wrong Sister has us exploring Madison, Wisconsin.

The Wrong Sister by T.E. Woods

Tess Kincaid has lived in Madison, Wisconsin, her entire life. Between her and her alcoholic father, their lives revolve around six square miles, and on the day Tess sees her doppelganger, she and every other Madison resident are stuck in traffic trying to get down Regent Street.

Tess spots her “twin” because she doesn’t fit in: “You rarely see that level of dress-up here in Madison. And you certainly don’t see it on a late workday afternoon when temperatures are in the high 90s with enough humidity to make your car windows sweat.”

Tess eventually tracks down the woman, named Mimi, in the HotelRED, where they discover their similarities while discussing whether their meeting was coincidence or something else.

“Things were slowing down. Madison closes up pretty early on a Thursday night. Even in the summer. Midwesterners would never let a night of revelry interfere with their up-with-the-sunrise attitude. There was another day of work tomorrow. Around these parts, you’ll hear middle-aged folks still referring to the weekday evenings as ‘school nights’.”

The pair get to know each other and come to believe they are twins separated after their parents split. Mimi asks Tess what it was like to grow up in ‘America’s heartland’ and wonders if it is a magical as Bon Jovi and John Mellencamp make it out to be.

Tess talks about ice skating in the winter, hanging out at the lake in the summer, families having coffee on the porch, chatting across white picket fences once the heat of the day abated, and the importance of being a University of Wisconsin fan. Through Tess, we experience Madison including Monroe Street where coffee shops are filled with a variety of people, making it the heart of the action; State Street, a perfect street to people watch; relaxing in front of Lake Wingra; and its beautiful trail system.

“Three lakeside trails in the heart of the city were jewels too lovely to ignore on this hot August evening. Especially on a Saturday. From this spot, one short trail headed west, the least popular of the trio. Another headed east, winding through old-growth trees and following the lake for over a mile, culminating at the Student Union Building where hundreds of people would be drinking beer, eating brats, and listening to music on an enormous stone lakeside terrace.”

Tess and her dad took the trail in the middle, which ends at a peninsula called Picnic Point. On this path the land narrows and the pair glimpse Lake Mendota. At the point, there are spots to sit where people can “contemplate the beauty of the lake and the city’s skyline, and think great thoughts.” 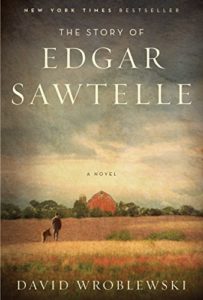 The Story of Edgar Sawtelle has us exploring the Chequamegon–Nicolet National Forest in Wisconsin.

The Story of Edgar Sawtelle

In The Story of Edgar Sawtelle by David Wroblewski, Trudy and Gar Sawtelle, their son Edgar, who can’t speak, and their Sawtelle dogs, which they breed, live on a farm that backs onto the Chequamegon–Nicolet National Forest in northern Wisconsin

“What was called the Chequamegon, as if it were a single block of forest, was in fact a Swiss cheese of government-owned forest and private property, particularly around the dozes of lakes.”

At the edge of their property runs a beautiful creek that is only two or three feet wide and so shallow “you could snatch a rock from the bottom without getting your wrist wet.” In the spring, the creek is a sluggish, clay-coloured river that always contained a flood of treasures, made all the more mysterious to Edgar as nothing but forest lay upstream.

When Edgar is a teenager, his father dies and something catastrophic happens, causing the boy and his dogs to rush into the forest. It is through Edgar that we discover the beauty of this national forest including ferns so lush it looked “primordial, green shadow world of grass and fiddleheads.

“They drifted from lake to lake, like stepping stones across a creek moving westward though the Chequamegon. Sometimes Edgar learned the names of the lakes through leaflets inside the cabins – Phoebus, Duckhead, Yellow – but usually it was just The Lake. Without maps, they found themselves hemmed in by marshes and forced to backtrack.”

It sounds like beautiful countryside (excluding the nasty biting insects) and Edgar listens to the yips and moans of beavers and the cry of loons at daybreak, watches as birds swoop toward the lake, eating insects. Edgar sees his first snapping turtle, the size of a dinner plate, and spends time fishing in the lakes.

Edgar and a man named Henry, whom he meets on his travels, make a stop in Brule, Wisconsin, where Henry shows him a cove he discovered.

They track through scrub pine and maple, trees that “were slick with green moss. …The air was filled with the scent of the lake. Even before Edgar glimpsed water he heard the smashing of waves against the shore. They emerged near a secluded cove…At the back stood a sheer rock wall, twenty of three feet high, forming an irregular curve covered with gray ledges and pocked with erosion holes, some so big they looked like caves. A colony of water birds squawked and flapped near the top, where a shag of turf and tree roots overhung the rock.”

Edgar understands at once why Henry likes the place. On a calm day, it would be a place to watch the flat horizon with no houses, roads or boats on the water.

You are viewing cached results from https://followsummer.com/books/wisconsin/