Located in the heart of India, New Delhi, Akshardham Temple is a marvel of architecture that evokes thousands of years of cultural heritage and is a tribute to Lord Swaminarayan (1781– 1830) who is an incarnation, deity and great saint of Hinduism. The construction of the grand structure took about 5 years and was inaugurated on 6 November 2005. Today this magnificent structure stands on the banks of river Yamuna and attracts millions of tourists and pilgrims across the world.

Originally, the word Akshardham is derived from two words ‘Akshar’ which means eternal and ‘Dham’ which means abode, meaning simultaneous abode of the divine or eternal. Entering the temple, one could see the 11-feet-high gold statue of Lord Swaminarayan which mesmerises. Visitors can feel each element of Akshardham resonating with spirituality that makes every soul potentially divine.

Witnesses to the main temple, other exhibitions take the visitor for additional darshan, including the Yogi Hriday Kamal, a lotus-shaped garden, Neelkanth Abhishek, a place to offer abhishek as water pours There is a ritual of reverence and prayer, Narayana Sarovar which is a lake with 151 different rivers of water that serves the temple, Premavati Ahraguruh (restaurant which caters to traditional vegetarian food) and more.

Travelers coming to visit the Akshardham temple are mesmerized by the temple decoration, which has some carved gods, flowers, creatures and musicians. The temple has 234 pillars, 9 domes and twenty thousand statues, sadhus, and devotees. A visit to Akshardham Temple is a spiritually rich experience. It is the beauty and grandeur of the Akshardham temple that makes it the center of tourist attraction in Delhi.

Akshardham Temple was built by Yogiji Maharaj, which was built by Pradhan Swami Maharaj, the former leader of BAPS (Bochasanavasi Akshar Purushottam Sanstha). Initially, the site for construction was not decided and suggested to the Guru at various places including Ghaziabad, Gurgaon, and Faridabad, but he was firm to the dream of Yogiji Maharaj, who wanted to build it on the banks of river Yamuna. Were. So keeping this in mind, Pradhan Swami Maharaj finally acquired an area of ​​30 acres on the banks of the Yamuna and started with the construction process. The temple was patronized on 6 November 2005 and today Akshardham Temple attracts around 70 percent of all tourists coming to Delhi from all over the world. 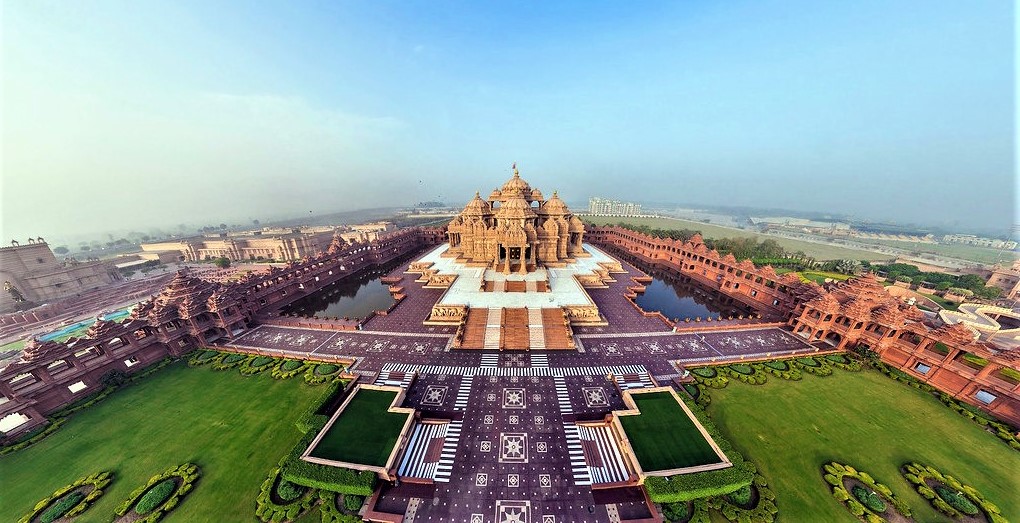 Individuals can visit the Akshardham Temple, a spiritual cultural complex between Tuesday and Sunday from 9:30 am to 7:30 pm weekdays, except Mondays.

Akshardham Temple can be visited throughout the year. But the winter season between November to February is considered to be the best as the weather remains cool and pleasant.

Top places to see NEARBY

Visiting Delhi never disappoints travelers as it has many things to do and places to see that cater to Delhi sightseeing.

1. Located at a distance of 8 km, visit India Gate which is the most iconic structure in New Delhi and yet another popular tourist attraction which is a must visit.

2. A visit to the Lotus Temple which is situated at a distance of 15 km from Akshardham Temple will take you to a pleasant and serene environment.

3. For Shopaholics, a visit to Connaught Place would be the perfect option which is located at a distance of 9 km from the magnificent Akshardham Temple.

4. A visit to the Red Fort, which is a UNESCO World Heritage Site, is a must visit that speaks volumes about its cultural value.

5. Seek blessings at the Gurudwara Bangla Sahib which is 11 km from Akshardham Temple.

You are viewing cached results from http://feedproxy.google.com/~r/TravelAndTreasures/~3/VO7MUvXW9nA/akshardham.html